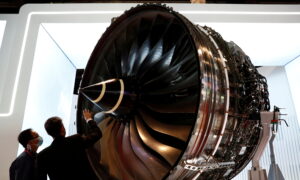 LONDON—Rolls Royce has enough funding to weather the crisis in the aviation industry caused by the pandemic, its chief executive said on Thursday after the engine maker plunged to a record £4 billion ($5.6 billion) underlying loss for 2020.

The British company said its cash burn should halve this year, and turn positive in the second half as vaccinations kick in and travelers return to the skies.

“The worst is now well behind us,” CEO Warren East said.

But even if that proves optimistic, Rolls is well placed to cope with more turmoil after a drive to cut costs and raise funds, he added.

“We have our cash burn under control … We have ample liquidity to get through this crisis as long as it lasts,” East told reporters.

Rolls’ model of charging airlines for the number of hours its engines fly meant much of its income dried up last year when travel stopped, forcing it to ask shareholders for cash and take on £5.3 billion ($7.35 billion) of new debt.

Its civil aerospace arm, whose engines power Airbus A350 and Boeing 787 jets, accounts for just over half of group revenue in a normal year.

Last year’s cash burn of £4.2 billion ($5.8 billion) was in line with analysts’ expectations, and Rolls guided that would reduce this year to £2 billion ($2.8 billion).

The company axed 15 percent of staff in 2020, and earmarked £2 billion ($2.8 billion) of assets for sale to repair its balance sheet.

Rolls, founded in 1906 and one of the last vestiges of Britain’s once-mighty manufacturing industry, posted an underlying pretax loss of £4 billion ($5.6 billion) for 2020, worse than analyst expectations for a £3.1 billion ($4.3 billion) loss and its biggest ever on an underlying basis.

Rolls shares were up 2.6 percent to 116 pence ($1.62) at 1050 GMT. They have lost 41 percent since the start of the pandemic around a year ago, but have gained 22 percent in the last month on travel recovery hopes.

Jefferies analyst Sandy Morris said Rolls had “much to do,” but the “fix” was feasible. “The possibility of reaching modest net debt by end 2023 is alive,” he said.

Rolls’ cash flow improvement this year depends on airlines flying 55 percent of 2019 levels during 2021. Its assumption is for more travel later this year as vaccine programs progress.

The sale of Rolls’ Spain-based ITP unit, expected to be its biggest disposal, is progressing well and there are ongoing conversations with a number of potential buyers, it said.

“We’re open to approaches from any party with a credible offering at the moment. That includes being open, by the way, to discussions with potential Spanish investors or partners,” East said.