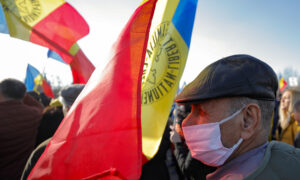 Romania on Sunday recorded its highest number of the CCP (Chinese Communist Party) virus patients in intensive care units since the pandemic began.

The increasing pressure on ICU wards—where 1,334 people are currently receiving care—comes amid a surge of virus cases in the country. Over the past week, Romania has been recording its highest number of infections in three months—on some days more than 6,000 new daily cases.

Infections Continue To Climb in Turkey

Health ministry statistics released late Saturday showed the rate of infection as more than 251 cases per 100,000 in Istanbul, the country’s largest city—up 41 percent since last week. That means about 40,000 new infections in Istanbul alone, which has quadrupled from numbers first released six weeks ago.

Republic of Congo pressed ahead Sunday with an election in which President Denis Sassou N’Guesso is widely expected to extend his 36 years in power, while the leading opposition candidate was flown to France after suffering virus complications.

The watchdog group NetBlocks reported an internet blackout that began in the Central African country around midnight on election day.

France Pushes Vaccines as Leaders Debate Jabs for All

French health workers soldiered on with the country’s CCP virus vaccination drive on Sunday on the second day of a new lockdown in parts of France and amid differing views among leaders over whether inoculations should be open to everyone.

France resumed use of the AstraZeneca vaccine on Friday, a day after the European Union’s drug watchdog said it was convinced that the shot’s benefits outweighed any risks. More than a dozen nations including France had suspended its use following an investigation into reports of blood disorders.

An Israeli court on Sunday upheld a school’s decision to bar a teaching assistant who had refused to show proof she had been vaccinated or tested for the CCP virus.

The teaching assistant, Sigal Avishai, had argued that the school’s policy was an unlawful breach of her medical privacy and that she was being “pressured to get vaccinated against her beliefs”, the court said.

Denmark said on Saturday that one person had died and another fell seriously ill with blood clots and cerebral hemorrhage after receiving the AstraZeneca vaccination.

The two, both hospital staff members, had both received the AstraZeneca vaccine less than 14 days before getting ill, the authority that runs public hospitals in Copenhagen said.

The Associated Press and Reuters contributed to this report