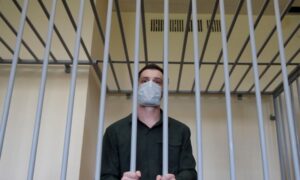 Moscow — Russia’s Court of Appeals on Monday upheld a nine-year imprisonment for Trevor Reed, a former U.S. Marine who was convicted last year for endangering the lives of two police officers in August 2019.

US Ambassador John Sullivan, who returned to Moscow last week after leaving the country in April during the diplomatic crisis, said he regrets the court’s decision.

“Today marks another sad milestone because Trevor Reed’s complaint was dismissed,” Sullivan said in a comment shared on Twitter by an embassy spokesman.

“(It) is another ridiculous false charge in Russia that the world sees,” Sullivan said.

U.S. Department of State spokesperson Ned Price said in a Twitter post that “we are deeply worried” in a court decision, and Washington leads “until Russia does the right thing and returns him to his family.” He said he would work on his behalf.

President Vladimir Putin and his US counterpart Joe Biden discussed the topic of prisoner exchange at a meeting in Geneva this month.