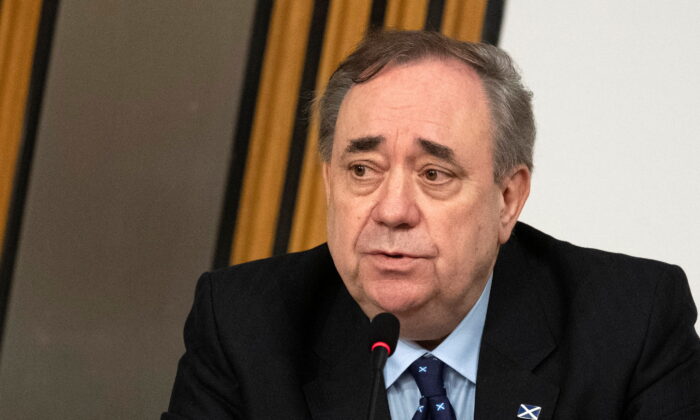 Former Scottish National Party leader and former First Minister of Scotland, Alex Salmond makes his opening statement to The Committee on the Scottish Government Handling of Harassment Complaints at Holyrood, examining the government’s handling of harassment allegations against him, in Edinburgh, Scotland, Britain, on Feb. 26, 2021. (Andy Buchanan/Pool via Reuters)

LONDON —Former Scottish First Minister Alex Salmond launched a new pro-independence party on Friday to run in May’s parliamentary election, a move that could splinter the separatist vote by grabbing support away from Nicola Sturgeon, his protege turned foe.

British Prime Minister Boris Johnson has repeatedly rejected calls for a fresh vote on Scottish independence following the last one in 2014 that resulted in a vote to stay part of the United Kingdom. Opinion polls in the last 12 months have shown historically high support for independence.

The May 6 election is seen as a critical test of public sentiment in Scotland, and an opportunity for the Scottish National Party that Sturgeon leads to put fresh pressure on Johnson.

“I’m announcing the public launch of a new political force: the Alba Party,” Salmond said in a statement broadcast on Twitter.

“Alba will contest the upcoming Scottish elections as a list-only party under my leadership, seeking to build a super majority for independence in the Scottish Parliament.”

As leader of the Scottish National Party, Salmond led the devolved Scottish government for seven years until 2014 and helped drive growing support for independence.

He was the most prominent pro-independence figure in the 2014 referendum, in which Scots rejected independence by 55 percent to 45 percent.

Salmond and current First Minister Sturgeon were close friends and allies, but they fell out after several women made sexual harassment complaints against him.

Salmond was acquitted in 2020 of charges of sexual assault. He has portrayed himself as the victim of a conspiracy to drive him out of public life, and won 500,000 pounds in legal costs from the Scottish government after its handling of an investigation into his behaviour was ruled unlawful.

Salmond said the Alba Party would avoid splitting the pro-independence vote because it would encourage people to vote SNP in constituency-specific seats, but to vote for his new party where seats are allocated according to larger regional lists.

He said this would lead to more pro-independence lawmakers in Scotland’s parliament and add fresh momentum to the independence drive.

“Boris Johnson has already said no to the SNP proposals, he will find it much more difficult to say no to a parliament, and a country,” Salmond said.