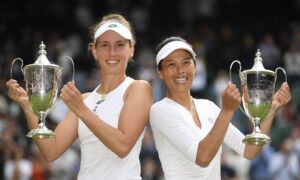 London-Taiwan Hsieh Su-wei wins the marathon final with Russian duo Veronika Kudermetova and Elena Besnina on Saturday for her third Wimbledon doubles title with Elise Mertens and a third different partner. Claimed to have won.

The Taiwanese and Belgian duo saved match points in the process of claiming a 3–6 7–5 9–7 victory on the center court.

It was the Wimbledon Doubles Crown for the second year in a row that joined Barbora Strycova, who recently retired to win the title in 2019.

Unseeded Kudermetova and Vesnina had two match points in the second set of 5–4. The second set produced an incredible rally in which She finally won the volley.

As the third set continued, 35-year-old Hsieh finished a grip contest with the backhand winner.

“It felt like seven hours,” Mertens said of the two-and-a-half-hour fight on a packed center court.

“I was nervous, but in the end I managed it well.” We are very happy to be able to close it. “