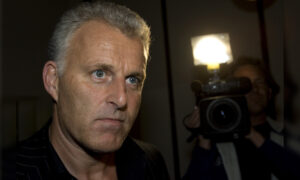 Journalist Peter R. De Vries, celebrated with courageous coverage of the Dutch underground world, was fighting for his life at a hospital in Amsterdam after a shooting on Tuesday night.

Two suspects remained in detention on Wednesday and a third person detained on Tuesday night was released, according to a statement from Dutch police. The motive for the attack has not been revealed.

Proponents brought the flowers to the crime scene, but they were still blocked by police.

The shootings shocked the Netherlands and caused anger from top Dutch officials, but such attacks are rare and the recent killings of journalists in Slovakia and Malta raise concerns about the safety of reporters in developed countries. Chords were also struck elsewhere in Europe that caused it. Democratic society.

“We may disagree with many of the things we see in the media, but journalists investigating the potential for abuse of power must agree that it is not a threat, but an asset to democracy and society.” The European Commission President Ursula von der Leyen told the European Parliament. Wednesday legislator.

European Council Chair Charles Michel called the shooting a “crime against our fundamental value of freedom of the press.”

The 64-year-old DeVries was long thought to be a potential target for the criminals he enthusiastically reported. Police and prosecutors refused to comment on whether he was protected by police.

De Vries won an International Emmy Award in 2008 for a television show he produced about the disappearance of US teenager Natalee Holloway during a vacation on the island of Aruba in the Caribbean Sea in the Netherlands in 2005.

Reporters Without Borders expressed “full solidarity” between De Vries’ family and all Dutch journalists on Wednesday, calling for the person responsible for the shooting to be brought to justice.

Dunya Miyatovic, a Human Rights Commissioner of the Council of Europe, wrote on Twitter: “We need to bring the perpetrators and masterminds of this horrific crime to justice and do everything to secure # SafetyOfJournalists in #Europe.”