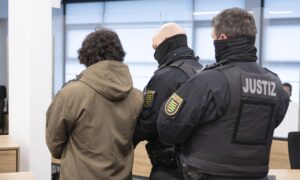 A Berlin-Syrian man was tried on Monday for killing a German man and seriously injuring another in last year’s attack, which prosecutors said was motivated by Islamic extremist ideology. ..

The trial of Abdullah AHH, whose full name was not disclosed by German privacy law, began in the eastern city of Dresden, where the attack took place on October 4.

Federal prosecutors allege that the defendant used a kitchen knife to attack two men in their 50s from behind. He considered it a “mortal sin” because they were holding hands and believed that they were a gay couple. The 21-year-old boy was arrested almost three weeks after the crime and has been in custody ever since.

Defendant has been charged with killing a 55-year-old victim, attempted murder, and serious physical harm to a 53-year-old man.

Deutsche Presse dpa testified in court that a forensic psychiatrist had told him he regretted that the defendant did not kill both men after the attack.

Defendant’s lawyer admitted that his client allowed the attack to be carried out and that the murder conviction requirements were met, but he is still a minor and should be subject to juvenile law. Proposed, dpa reported.

Defendant was released from prison a month before the attack after promoting a group of extremist Islamic State and then serving a three-year juvenile sentence for attacking prison guards.

The prosecution claimed that a defendant from Aleppo, who came to Germany as a refugee in 2015, was planning a further attack, but the details were not immediately known.