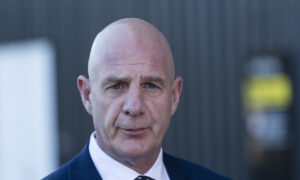 Tasmania, the island state in the south of Australia, will head to the polls on May 1, a year sooner than planned, after Speaker Sue Hickey quit the party, plunging the state Liberal government into a minority.

Gutwein defended the timing of the election being so close to when Labor Opposition Leader Rebecca White is set to give birth in June.

“I have given this a great deal of thought,” Gutwein said. “Obviously an election later this year is completely out of the question.”

“Plenty of pregnant woman continue to work,” she wrote. “I’m no different and I can assure everyone that as far as I’m concerned it’s game on!”

Hickey was told last weekend she would not be re-endorsed by the Liberals for the next election and is now operating as an independent.

She sensationally claimed the speakership three years ago by voting with opposition parties and has crossed the floor on contentious issues.

Hickey used the cover of parliamentary privilege this week to accuse federal Liberal Senator Eric Abetz of “[expletive]-shaming” Brittany Higgins, a federal parliamentary staffer who alleged that she was raped in Canberra’s Parliament House.

When drawn on the question outside Parliament, she refused to say more, noting that she could be liable for defamation for what she might say outside of Parliament.

Senator Abetz has strongly denied the claims, saying they are defamatory, and Prime Minister Scott Morrison has stood by him.

Morrison told ABC’s AM program on Thursday morning that Senator Abetz was a longstanding member of the Senate with a strong record.

“Senator Abetz, who is a longstanding member of the Senate—he’s a longstanding figure in public life and has a strong record when it comes to addressing these issues very seriously—has absolutely denied that,” Morrison said.

“I was not a party to the conversation. And so, you know, in this country, if people make allegations, they can make them.

“This has been strenuously denied. And so I think it would be very unfair to draw a conclusion here when, you know, the facts are in such dispute,” he said.

Tasmania’s Liberals are riding a wave of support on the back of the state’s COVID-19 response, which included an early call to shut the island’s borders.

According to an EMRS poll published in February, 61 percent of voters have Gutwein as their preferred premier, with White sitting at 26 percent.

The Liberals are the preferred party (52 percent) ahead of Labor (27 percent).

Gutwein took over as premier early last year after Will Hodgman’s surprise mid-term decision to step down as leader.

The Liberals will voluntarily disclose donations of more than $5,000 made during the election campaign.

Political donation reforms were slated to come before state Parliament prior to the election.

“I would hope that other parties would likewise voluntarily disclose thresholds and amounts themselves,” Gutwein said.

The Liberal government was returned for a second term in 2018, winning 13 of 25 seats.

It was the first time in 22 years that a Liberal government had won a second consecutive term in Tasmania.