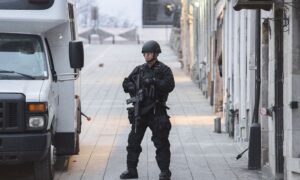 Between 1961, when the Berlin Wall was built, and 1989, when it collapsed, there were many bold escapes to freedom across the wall. According to some accounts, about 5,000 people manage this feat and risk their lives in bold ways, including crawling tunnels, using counterfeit passports, flying hot-air balloons, walking tightropes, and breaking tank walls. I was exposed to. Border guard. Thousands of people have made the attempt, and hundreds are believed to have died in the attempt.

These individuals were willing to risk their lives and be free. Still, they didn’t mind escaping East Berlin before the wall was built. For more than a decade, East Berlin and West Berlin still seemed to be one city, and traveling to and fleeing West Berlin was one of the easiest ways to escape East Germany. Hundreds of people did so every day. In fact, in August 1961, East German authorities decided to close the door. On August 13, 1961, shocked residents of East Berlin woke up and found a barbed wire between them and the west. Two days later, the construction of the wall began. Why did some people wait? They may have been convinced that the situation would not get worse.

Many people now seem to believe it. When the “two weeks to flatten the epidemic” COVID blockade began in March 2020, some of us warned that a dangerous precedent that could not be easily recovered was set. “The crisis is an ideal time to move into areas where the nation doesn’t want to retreat,” I wrote last spring. “In this new era, you will discover that all political leaders have Lenin in no small measure. They.” Some waved their hands and dismissed their feelings. Don’t worry, they said, it’s just a temporary way to get through difficult places.

Thirteen months later, in Ontario, Premier Doug Ford announced an extension of its current stay-at-home order. Ontario police have set up checkpoints on the border between Quebec and Manitoba to ban travelers. “Not required” retailers are closed. Labor inspectors visit the office to see if they comply with state guidelines. Police were empowered to stop people in the streets and cars on suspicion that they were heading for a “social gathering” and ask for their address and purpose of their trip. Please give me the documents, comrades. Quarantine hotels are our headache. Soon, the vaccine passport will be barbed wire.

Western liberal democracy, especially Canada, has fallen into authoritarianism. This transformation has been underway for a long time, apparently because of COVID. The virus simply unleashed a gathering storm. Over time, controlled states have steadily expanded their reach to all aspects of modern life. Governments oversee actions and speech, mainstream media advertise, public schools and universities indoctrinate, and professional regulators demand ideological harmony. Chattering classes now show ideas based on their own civilization, such as individual sovereignty over the group, freedom of speech, and equal treatment under the law. We once celebrated freedom and achievements, but people are now afraid, shy, dependent and obedient.

The law does not protect us. Law is a product of culture, and when culture changes, it accompanies it. Yes, our Charter of Rights and Freedom includes freedom and conscience, thought, beliefs, opinions, expressions, peaceful gatherings, basic freedom of association, as well as entering and exiting Canada and living in any state. It seems to guarantee the right to move for.

Some of these rights are currently infringed, but so far the courts have mostly said “well.” The rights of the Charter are subject to Section 1 “reasonable restrictions,” and the Supreme Court of Canada has long defended its ability to do what it considers best. As former Chief Judge Beverly McLaughlin once wrote, “the standards of constitutionality should not be set high enough to threaten responsible and creative solutions to difficult problems.” Of course, responsibility and creativity are made up of decisions by governments and courts, not individuals.

Historical records show that Western freedom is extraordinary. Human civilization tends to consist of tyranny, oppression, slavery, and violence. The current period of relative freedom may be declining rapidly, fragile brip in a dire panorama. As Professor Gary Morson of Northwestern University writes, we sometimes hear that “the pendulum always looks back.” But how do you know that the snowball has a pendulum instead of accelerating downhill? … Those who do not meet resistance will not stop. “

If we continue to tolerate, sanity, freedom, and individualism will probably come back next year. Perhaps they will take 20 years. Or perhaps they will disappear forever.

Bruce Purdy is a law professor at Queen’s University.