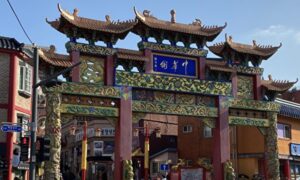 Recently, more than 600,000 Koreans have signed an online petition against the construction of a “Korean and Chinese Cultural Town” in Gangwon-do. As a result, the project was abandoned.

In 2019, Gangwon-do and People’s Daily of China agreed to start the project. The agreement was to build a Chinese cultural town covering an area of ​​1.2 million square meters in Chuncheon and Hongcheon (a city in Gangwon-do, South Korea). It would have been more than 10 times larger than Incheon Chinatown, which is currently the largest Chinatown in South Korea.

Governor of Gangwon, Munsu Che, called for the project part of the “One Belt, One Road Cultural Initiative” at the launch ceremony.

However, for Korean citizens, under the banner of cultural tourism exchange, it will promote the influence and dissemination of Chinese Communist Party (CCP) culture in South Korea.

On March 29, the petitioner launched an online petition to cancel the project on the Blue House website, stating: “Don’t give China Korean land. Korean people [South Korea] Concerned about losing our own culture, we should confront Chinese culture [the CCP’s] Looting Korean kimchi, hanbok, historical figures and other unique cultures. People are worried that China’s Northeast Project will lose their culture. It’s getting worse every day. “

By April 28, a month after the petition began, more than 670,000 people had signed it. According to regulations, the Korean government must respond when the number of signatures exceeds 200,000.

Colon Global Corporation, the construction company responsible for the cultural city projects in South Korea and China, has announced on April 27 that it will conduct a comprehensive review of the project through the Gangwon government. Some analysts believe this is equivalent to canceling the project.

In early April, a city official in Gyeonggi Province announced that he would invite the Chinese Communist Party ambassador to build a smart rural project in Pocheon. The project includes Confucius Village and Chinatown.

After the news was released, another petition against the project appeared on the Blue House website.

The petition’s author questioned Mayor Park Jung-guk’s decision to start the project, as he seemed to ignore the Korean anti-Chinese (CCP) sentiment following Gangwon’s petition. The petition also called for the withdrawal of the project. As of April 30, more than 32,000 people have signed online petitions.

An official from Pocheon City immediately explained, “At the beginning of the project, it was proposed as one of several ideas, but as a result of the review, it was excluded.”

Since the CCP took over China, the administration has worked hard to disrupt the culture and history of neighboring countries, other than ruining traditional Chinese culture and distorting China’s history.

The CCP launched a 2002 research project through the Chinese Academy of Social Sciences (CASS) in an attempt to distort Korean cultural history. The announcement of this project caused anger in South Korea.

The project has been seriously criticized by both Korean scholars and scholars from other countries. It was seen as an attempt to distort history and a cultural plunder of Korean history. The project ended by abandoning what was recorded throughout the Chinese dynasty and adapting a modern vision of ancient history that lacks an academic foundation.

The impact of the project is believed to be protracted. In fact, as one of the Blue House petitions said, many people doubt it’s done so far.

“This Chinatown project is in compliance with the appeasement policy. Koreans know that this project will lay the foundation for the expansion of the Chinese Communist Party in South Korea and promote Chinese people. [CCP] Korean nationalism.So I have a project [Korean-China Cultural Town] It will be canceled. Because after the controversy over the origin of our traditional culture, kimchi and hanbok, many Koreans felt very violated and despised, “he said.

He said Hong Kong’s extradition campaign has gained general support from South Koreans. He said Koreans are fed up with the Chinese Communist Party’s suppression of human rights.

He also pointed out that Koreans know that the Chinese Communist Party is trying to manipulate the “One Belt, One Road” initiative in the name of cultural exchange with the aim of influencing the politics and economy of the region.