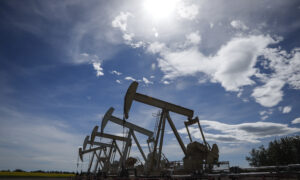 Three-quarters of Canadian workers in the oil and gas industry could lose their jobs due to the government’s green energy strategy, according to a report calling for the development of measures to secure workers’ career changes. ..

Report, TDEconomics announced on Tuesday that 50-75% of the 600,000 workers in the oil and gas sector, or approximately 312,000-450,000 workers (mainly Alberta, Saskatchewan, Newfoundland and Labrador) , The result of Canada’s efforts to reduce carbon emissions.

In December 2020, Prime Minister Justin Trudeau announced Canada’s new climate planKnown for its healthy environment and healthy economy, it aims to reduce carbon emissions by up to 40% by 2030 and reach net zero emissions by 2050.

These positive goals come at the expense of the carbon-intensive oil and gas sector. The report states that oil and gas extraction and distribution account for more than a quarter of Canada’s greenhouse gas emissions. Still, oil and gas also account for two-thirds of Canada’s energy consumption.

There are two steps to reducing carbon emissions. One is the “fundamental shift to electrification, renewable electricity and clean fuels” and the other is the reduction of emissions intensity in the oil and gas sector through new technologies.

According to the report, the net zero scenario does not completely eliminate the demand for fossil fuels, but the viability of the industry is determined by its ability to regulate all forms of emissions.

In the net-zero scenario, oil and gas demand in North America will be cut in half, followed by a sharp drop in production and the movement of thousands of workers, either directly or indirectly.

Past manufacturing experience in both the United States and Canada has provided some precautions for such a transition. From the 1990s to the early 2000s, automation and skill-biased technological changes drastically reduced routine manual work and caused widespread migration among mid-career middle-income workers.

The report warns of the dangers of assuming that workers expelled from the oil and gas sector are fully adapted to the green energy industry. First, skill-biased transition obstacles also exist between the oil and gas sector and the clean energy industry. The geographical background of green energy work should also be taken into account during the transition of workers. Unlike fossil fuels, the extraction of renewable energy is not necessarily limited by the location of the natural deposits of the resource.

The report suggests that Canada’s federal and state governments have incorporated three elements into their transition policy framework. The first is to work with industry and training service providers to identify the skills needed in the clean energy sector and redesign a new retraining framework for those affected by the transition.