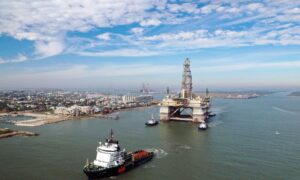 Mexico City — Mexico’s state-owned oil company said Monday that a strange sequence of events, including a gas pipeline leak at the same time as a thunderstorm, caused the strange underwater fireball seen in the Gulf of Mexico last week.

Petroleos Mexicanos said heavy rain and lightning storms on July 2 forced the company to shut down pumping stations servicing offshore rigs near the location of the fire.

At the same time, the company said a leak in the underwater pipeline caused natural gas to accumulate on the seabed and rise to the surface, probably ignited by lightning.

Pemex sent a flame control vessel to pump more water into the flames, but no one was injured in the field off Kumarov Zap. Crude oil did not spill. Pemex said it is repairing the pump and investigating the cause of the gas leak.

The accident unleashed a fireball in the water that appeared to boil the Gulf of Mexico, eliciting criticism from environmentalists.

President Andrés Manuel López Obrador has made a big bet on drilling more wells and buying or building oil refineries. He advertises oil as “the best business in the world.”

Climate change activist Greta Thunberg has reposted a video clip of the fireball to her Twitter account.

“On the other hand, powers call themselves’climate leaders’ by opening new oil fields, pipelines and coal-fired power plants and granting new oil licenses to explore future oil drilling sites. “Thunberg writes. “This is the world they are leaving for us.”