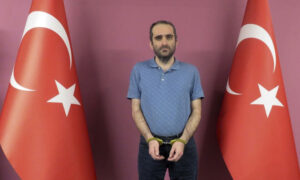 Ankara-Turkish intelligence arrested the nephew of US-based Muslim priest Fetofuller Gulen in an overseas operation and took him to Turkey.

Anadolu Agency reported that Serahadin Gulen, who was wanted in Turkey as a member of a terrorist organization, was arrested in an operation by Turkey’s national intelligence agency MIT.

The report does not mention where he was arrested or when he returned to Turkey. However, Gulen’s nephew was thought to live in Kenya.

His case is the latest in a series of deportations of people involved in the Gulen movement, and the Turkish government has accused the failed coup attempt in 2016.

Gulen, a former ally of Turkey’s President Recep Tayyip Erdogan, now in exile in Pennsylvania, has denied allegations of involvement in the attempted coup.

Turkey has designated Gulen’s network as a terrorist group and named it the Fethullah Güst Terrorist Organization (FETO).

Erdogan announced in early May that a prominent member of Gulen’s network had been arrested, but did not provide details.

On July 15, 2016, a faction within the Turkish army attempted to defeat Erdogan using tanks, fighters, and helicopters. Fighters bombed the Turkish capital parliament and elsewhere. Thousands of people went out to the streets to stop the coup, listening to the president’s call.

A total of 251 people were killed and about 2,200 were injured. About 35 coup planners were also killed.