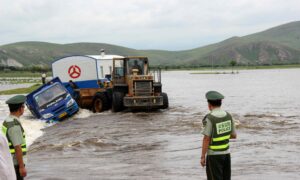 The dam in Hulunbuir, Inner Mongolia, collapsed on Sunday afternoon. According to the Ministry of Water Resources, they formed a reservoir with a total storage capacity of 46 million cubic meters.

People living downstream have been evacuated and no casualties have been reported, he said.

Extreme weather has hit several parts of the world in recent weeks with floods in Europe and heat waves in North America, raising concerns about climate change.

The Hulunbuir city government said in a WeChat account that 16,660 people were affected and 53,807 acres of farmland were submerged. Bridges and other transportation infrastructure have also been destroyed.

A video posted on Chinese social media showed that one of the dams was completely washed away and flooded a nearby field.

China has more than 98,000 reservoirs used to regulate floods, generate electricity and promote transport. The government acknowledges that more than 80 percent of them are more than 40 years old and pose some safety risks.

The lack of financial resources means that nearly one-third of the total have not completed compulsory safety assessments, Water Resources Deputy Minister Wei Shanzhong told the briefing this year.