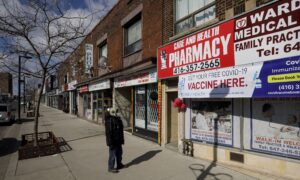 This week marked the anniversary of Canada’s COVID-19 confinements that were only supposed to last for a few weeks. That was 52 weeks ago.

In many ways, fear became the pandemic. Different people drive the COVID-19 fear, but its principal generators are statisticians and the medical bureaucrats—the experts “advising” the politicians, who in turn display appearances of virtue, claiming to save lives. In competing for our attention, the media are a gigantic amplifier of COVID-19 fear.

Along with life-saving claims, Canada’s chief public health officer has finally admitted to presiding over a massive failure in protecting the most vulnerable, who constitute the majority of those who died. Camouflaging the failure, authorities confine and restrict us all the more with the pretence of protecting us. Yet the vulnerable keep dying, and those at much less risk are confined in domestic violence situations, forcibly unemployed, forced to forgo treatment for chronic illness, or forced to watch their business crash and their savings vapourize. It has taken a year for the chief public health officer to admit failure, but she has manifested no desire to correct or reverse course.

Neither the admission of failure nor the absence of solutions (other than to hope for vaccination) have stopped the fear wagon that sent us here a year ago. Instead, in time for the anniversary, fresh alarmist calls give more horsepower to the wagon. Experts are calling for greater lockdowns, more restrictive and oppressive. And they are doing so in language that instils even more fear.

On Feb. 8, a month before the one-year anniversary of the World Health Organization declaring the COVID-19 pandemic, a Laurentian medical bureaucrat ominously heralded a brand new source of fear: “Today we are in a … transition to a new pandemic.” She is Toronto’s medical officer of health and an adjunct at the University of Toronto. She was commenting on statistical modelling crafted at York University. The model would have us believe that Toronto alone could see “15,865 deaths by May” of this year if SARS-CoV-2, propelled by new variants, reached an infection rate of 20 percent. For perspective, that would amount to over 75 percent of all COVID-related deaths so far recorded in Canada.

To be clear, whatever the fantastic predictions of a model, the health officer of a single city, even if it is Toronto, has zero authority to declare a new pandemic. A pandemic is a global event, not an outbreak inside a city, a province, or even a country. Toronto’s medical officer of health’s proclamation constitutes a deliberate exaggeration and an unseemly self-anointing with immense authority. How does one take her seriously when she makes planet-size pronouncements?

It took only three days for a University of Toronto colleague to outdo the medical officer of health’s ridiculous fear-mongering declaration. The director of the Ontario COVID-19 Science Advisory Table raced out of the transition she had announced by declaring that the second pandemic had in fact arrived. Jurisdictionally, he has even less medical authority than the medical officer of health but that did not temper him in saying more outrageous and terrifying things.

According to him, the arrival of a “new pandemic,” identified with B.1.1.7, the so-called British strain, should be distinguished from “the traditional pandemic” that originated in Wuhan, China. The absurd, puzzling, and disorienting is also scary: his science table reported “exponential growth” (as if viruses advance in any other way) driving a “third wave” of COVID-19 that he described in less than scientific terms as “a pandemic within a pandemic.” (Ironically, this expression appeared in September 2020 in the New England Journal of Medicine to describe the domestic abuse spiked by the lockdowns that the science table director recommends with feigned reservation).

Peddling the fear of a second pandemic obscures the reality that B.1.1.7 advanced inside the second lockdown that has not even fully ended. The Ontario COVID-19 Science Advisory Table director does not wonder if lockdowns have failed. Instead, he calls for even “firmer” lockdowns, by which he means more draconian and to which he refers as “the right thing.” The premier of Ontario says he “always respects” and will do what the medical experts say. But the science table director is no brute; he offers comfort: “If this works out well with the vaccines,” he told CTV, “it will be the last time that we do that. There won’t be any more lockdowns.”

Who can maintain faith in lockdown promises and medical bureaucrats when we consider the abominable failure in protecting the most vulnerable during two separate viral waves; two rounds of harmful lockdowns and curfews that keep expanding and extending; the draconian arrests and fines; the incalculable hurt of unintended health, social, and economic consequences; and the ongoing botched vaccination efforts?

Let’s now add, a year into it, the prideful flights of fancy of local bureaucrats declaring newer and scarier pandemics.

Marco Navarro-Génie is senior fellow with the Frontier Centre for Public Policy and president of the Haultain Research Institute. He is co-author, with Barry Cooper, of “COVID-19: The Politics of a Pandemic Moral Panic” (2020).