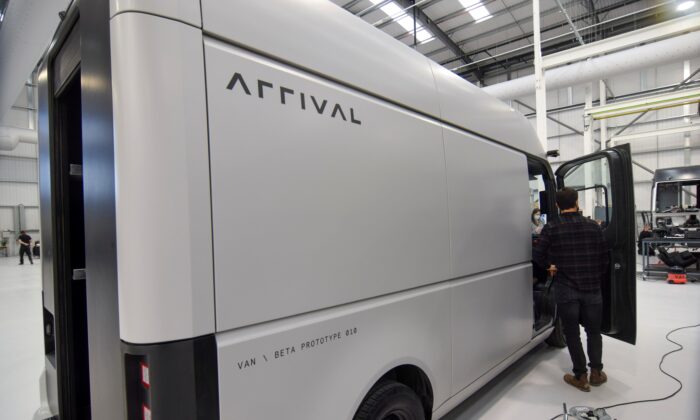 A man stands next to a fully-electric test van, due to go into production in 2022, built by electric van and bus maker Arrival Ltd, that has seen a spike in interest due to soaring e-commerce amid the coronavirus disease (COVID-19) pandemic and looming fossil-fuel vehicle bans, in Banbury, Britain, on Feb. 23, 2021. (Nick Carey/Reuters)

LONDON—British electric van and bus startup Arrival said on Wednesday that it will build a new plant in North Carolina and much of its production will go to fulfilling an order from package delivery company UPS for up to 10,000 vehicles.

Arrival’s “microfactory” in Charlotte will be the startup’s second U.S. plant and is due to launch production in the third quarter of 2022. Last October, Arrival announced plans for a plant in South Carolina.

Arrival plans a series of small plants—which it dubs “microfactories”—that will take up far less space and require lower investments than conventional vehicle factories that will not include expensive paint shops or welding equipment, which also require a lot of space. The company also has a plant in England.

Arrival will invest around $41.2 million in the Charlotte plant, which will be able to assemble up to 10,000 electric delivery vans annually and create more than 250 jobs.

The van and bus maker will go public later this month via a merger with CIIG Merger Corp, a special-purpose acquisition company (SPAC).

Feverish investor interest in finding the next Tesla Inc and bringing them to market via SPACs has included commercial EV startups like Canoo Inc and Arrival.

Tightening CO2 emissions targets in Europe and China have combined with improving battery technology to provide greater range at lower costs, giving commercial electric vehicles (EVs) their moment in the sun after years of waiting.

The coronavirus pandemic has also boosted the need for vans to deliver goods to consumers at home.

Ford Motor Co said on Tuesday the next version of its Transit van for the European market will go into production in Turkey in 2023 and include fully electric and hybrid variants along with the combustion-engined version.