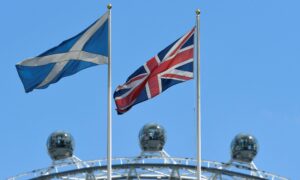 LONDON—Britain’s cabinet office will set up a “second flagship HQ” in Glasgow as the government plans to move some of its operations to Scotland, ministers announced on March 15, at a time when support for Scottish independence is running high.

Ties between Scotland and the rest of Britain have been badly strained by a much-criticised COVID-19 pandemic response and Brexit, which a majority in Scotland opposed.

That has worsened for many Scottish the sense that policies designed in London don’t represent their views and make their day-to-day lives harder.

The cabinet office, which oversees the running of the government machine, said it was creating a new headquarters in Glasgow, while the foreign office planned to create 500 new jobs at an existing office in East Kilbride.

“Not only will this bring new jobs and investment to Scotland, it will strengthen the diversity of the UK civil service, ending the Westminster knows best approach to policymaking and ensuring Scottish voices shape everything we do,” Cabinet Office minister Michael Gove said in a statement.

In total, 1,000 more jobs would be located in Scotland over the next four years. The exact functions to be shifted to Scotland were not set out.

More of the government’s 400,000-plus employees are based in London than any other city, although there has been a long-term push to locate more of these jobs elsewhere to challenge the perception of London-centric policymaking.

Scottish nationalists are pushing for an independence referendum to be held after this May’s Scottish parliament election, but British Prime Minister Boris Johnson has said such votes should happen only once in a generation.

In a referendum in 2014, Scots voted 55 percent to 45 percent to remain in the United Kingdom.