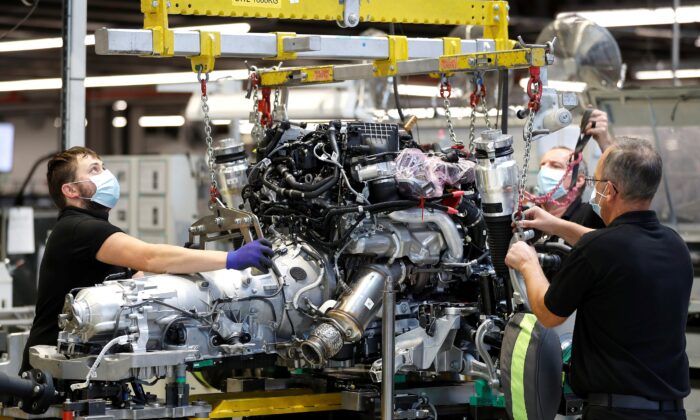 Technicians work on a Rolls-Royce engine prior to it being installed in a car on the production line of the Rolls-Royce Goodwood factory, near Chichester, Britain, on Sept. 1, 2020. (Peter Nicholls/Reuters)

LONDON—British manufacturing showed clear signs of revival in March as a gauge of new orders rose to its highest in almost two years and companies became increasingly optimistic about future output, a survey showed on Tuesday.

The Confederation of British Industry’s (CBI) monthly order book balance rose in March to -5, the highest reading since April 2019 and up from -24 last month. A Reuters poll of economists had pointed to a much smaller increase to -20.

Output expectations for the next three months rose to their highest since August 2017, the CBI said.

“It’s great to see the mood lift among manufacturers, buoyed by a jump in order books. But firms continue to grapple with higher freight costs as well as raw material shortages,” Anna Leach, deputy chief economist at the CBI, said.

Leach added that growth may be hindered by a resurgence of the COVID-19 pandemic in European markets, where there has been a slower roll-out of vaccines than in Britain.