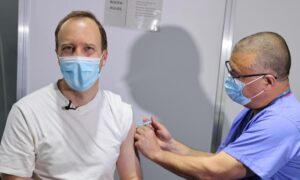 British Health Minister Matt Hancock received his first dose of the Oxford / AstraZeneca COVID-19 vaccine on Thursday at a public show of support for a jab suspected of causing a life-threatening blood clot.

I feel good now that I have my first jab.

Many thanks to JVT for managing the Oxford / AstraZeneca vaccination and doing a lot for us through the pandemic.

When I got the call, I got a jab. pic.twitter.com/nmDCwCg5qX

When asked for a jab, Hancock said he was “very excited” and encouraged everyone to accept the offer.

The Ministry of Health has confirmed that Hancock has been vaccinated with the Oxford / AstraZeneca vaccine against the CCP (Chinese Communist Party) virus (also known as the new coronavirus).

The Medicines and Healthcare Products Regulatory Agency (MHRA), the UK’s drug regulator, said on April 7 that 19 people died in the UK after a blood clot developed after the AstraZeneca jab vaccination.

However, MHRA argued that the benefits of vaccination “continue to outweigh the risks.”

The European Medicines Agency (EMA), the European Union’s drug regulator, also said there was a “potential link” between the AstraZeneca vaccine and the “very rare” blood clot, but continued vaccination. We encouraged them to do so and emphasized that the benefits outweigh the risks.

Some Christians have expressed ethical concerns about the vaccine development process.

In an open letter to the so-called “vaccine passport” issued earlier this month, British church leaders said that some Christians had “a serious problem of ethics related to the ethics of vaccine production or testing.” I said there is.

Last month, a Catholic bishop in the United States said Jab was “developed, tested, and manufactured on an abortion-derived cell line,” so if alternatives are available, get the adenovirus vector COVID-19 vaccine from Johnson & Johnson. I advised Catholics not to.

The Johnson & Johnson stem cell line, according to Science, comes from an abortion in 1985.

Like the AstraZeneca jab, the Johnson & Johnson vaccine has been found by the EMA to be “potentially associated” with blood clots.

Jack Philips and Katabella Roberts contributed to this report.