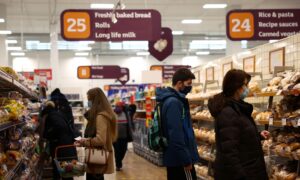 LONDON—The number of people heading out to shops across Britain rose by 0.5 percent in the week to March 20 from a week earlier, the eighth rise in nine weeks despite a national lockdown, market researcher Springboard said on Monday.

England entered a third national lockdown on Jan. 4 to stem a surge in COVID-19 cases that threatened to overwhelm the health system.

The rules in England closed schools to most pupils, people were told to work from home where possible, and all hospitality and non-essential shops were closed. Scotland, Wales, and Northern Ireland imposed similar measures.

Some essential shops such as food outlets and home improvement retailers have been allowed to stay open.

Schools in England reopened for in-person lessons on March 8 and non-essential shops are scheduled to open again on April 12.