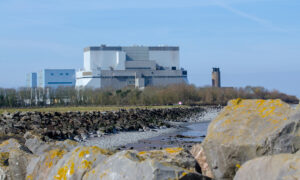 Britain will allow two nuclear reactors at Hinkley Point where cracks were found to resume limited operations ahead of their scheduled closure in 2022, the sector’s regulator said on Wednesday.

Operated by France’s EDF, the two reactors at Hinkley Point B power station in Somerset, southwest England, will each be allowed to operate for two periods of approximately six months each, the Office for Nuclear Regulation (ONR) said.

The reactors were halted in February and June 2020, and inspections have found cracks in graphite bricks in the reactors’ cores.

The 480-megawatt reactors will undergo inspections between each period of operation to ensure the cracking does not compromise safety requirements, the ONR said.

“We are satisfied that the Hinkley Point B Reactors 3 and 4 are safe to operate for the specified periods,” ONR said.

“We are pleased the regulator has approved the re-start of Hinkley Point B,” an EDF spokesperson said.