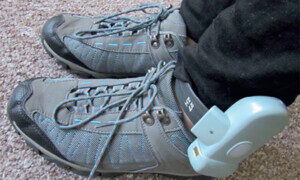 Burglars, thieves, and robbers will be made to wear GPS tags on release from prison under new rules intended to reduce reoffending, the UK Ministry of Justice announced on Wednesday.

Those who have served a prison sentence of a year or more for theft and robbery will be automatically fitted with a tag on release, allowing them to be monitored 24 hours a day for up to 12 months, the ministry said in a statement.

More than half of those convicted of burglary and theft go on to re-offend within a year of release.

For the first time, these offenders will be fitted with GPS tags on release from prison, aiming to protect the public from further burglaries and thefts.https://t.co/emgUGn49UL

More than half of those convicted of theft and burglary re-offend within a year after being released, and almost 80 percent of such cases result in no suspect being identified, the ministry said.

“Being burgled or robbed is devastating and I understand how frustrating it is when the perpetrators can’t be caught, both for the public and the police,” said Kit Malthouse, the minister for crime and policing.

“Tagging these prolific offenders so we know where they are 24 hours a day should be powerful persuasion to change their ways and will help police find and charge them if they don’t. It’s another tool helping probation staff to cut crime and keep the public safe,” he said.

With the help of these tags, police will be able to find out if the offenders have been in the vicinity of recent burglaries, thefts, and robberies.

It will provide a “vital extra source of intelligence” to help police catch persistent offenders, the ministry said.

“Tagging prolific offenders provides a strong deterrent and means officers will be able to quickly arrest and gather evidence against anyone suspected of being involved in a robbery, burglary or other theft,” said Deputy Chief Constable Jon Stratford, electronic monitoring lead at the National Police Chief’s Council.

“This scheme will play a part in our overall work to prevent crime and keep our communities safe.”

This scheme will be launched on Apr. 12 in six police force areas—Avon and Somerset, Cheshire, Gloucestershire, Gwent, Humberside, and West Midlands, with an estimated 250 offenders expected to be tagged in the first six months.

After that, the tagging scheme will be extended to a further 13 areas in September.