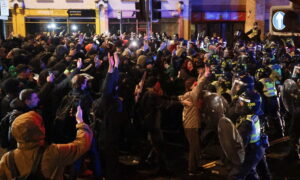 Prime Minister Boris Johnson has condemned the violent mob attacks on police officers in Bristol on Friday evening, and pledged his “full support” for the police.

The police said officers came under attack when a protest against the government’s Police, Crime, Sentencing, and Courts bill on Friday afternoon turned violent in the evening. Police made 10 arrests in Bristol city centre during the incident.

“Our officers should not have to face having bricks, bottles, and fireworks being thrown at them by a mob intent on violence and causing damage to property,” said Johnson, adding that, “The police and the city have my full support.”

A little earlier, Home Secretary Priti Patel said she was “disgusted” by the disorder and violence.

“I’m in no doubt the silent, law-abiding majority will be appalled by the actions of this criminal minority. Despite repeated warnings to disperse, it’s clear these thugs were only intent on causing trouble,” she wrote on Twitter.

Superintendent Mark Runacres of the Avon and Somerset Police said, “The majority of people acted peacefully however there was a minority who once again showed hostility to officers.”

“Items, including glass bottles and bricks, were thrown at officers, fireworks were launched at our mounted section, while one of our horses was also covered with paint.”

“Ten people were arrested for offences including violent disorder, assaulting an emergency worker, and possession of Class A drugs,” he said, adding that three of those arrested were also detained in connection with the riot which took place last weekend.

On March 21, also during a protest against the policing bill, rioters vandalised the police station exterior, set police vehicles on fire, and left 21 officers injured, two of them seriously.

According to The Times of London, several left-wing groups encouraged their followers to attend the protest last weekend, included Extinction Rebellion, All Black Lives Bristol, and Socialist Workers Party Bristol.

Another left-wing group—No Fixed Abode Anti Fascists—told people not to share footage of protesters unless they were in masks, the paper reported.

The Police, Crime, Sentencing, and Courts bill, which covers a wide range of policy areas, would give police new powers to impose time and noise limits on street protests. It was introduced after several disruptive Black Lives Matter and Extinction Rebellion protests caused road closures, disruption of newspaper printing, and vandalism of statues last year.

London police on March 13 clashed with mourners and protesters at a vigil held for alleged kidnap and murder victim Sarah Everard while enforcing CCP (Chinese Communist Party) virus restrictions, sparking days of protest against the police, government’s restriction measures, and the new bill.

Lily Zhou and Reuters contributed to this report.