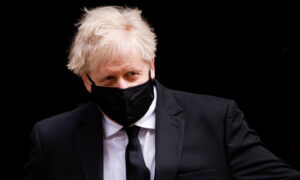 London — The first operational deployment of Britain’s flagship aircraft carrier HMS Queen Elizabeth in Asia will show countries such as China that Britain believes in the law of the sea, Boris Johnson said Friday. ..

Johnson said a carrier strike group that interacts with more than 40 countries as it deploys to Japan via the Mediterranean, Indian Ocean, and South China Sea predicts Britain’s value and its military strength.

“One of the things we do clearly is to show our friends in China that we believe in the law of the sea. We prove that, not in a confident but confrontational way.” He told the broadcaster. Board an aircraft carrier at Portsmouth Naval Base in South England.

“We don’t want to be hostile to anyone, but Britain, along with friends and partners, Americans, Dutch, Australians, Indians and many others, is very important in supporting the rule of law. I think it plays a role. Law, an international rule-based system on which we all depend. “