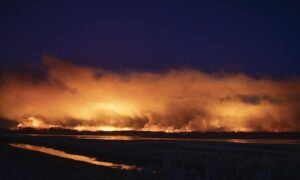 Prince Albert, Saskatchewan — A large wildfire broke out on Tuesday near the third largest city in Saskatchewan, despite firefighters fighting the flames.

“The fire is getting more intense,” said Greg Dionne, Mayor of Prince Albert.

About 40,000 cities, about 140 kilometers northeast of Saskatoon, are not strangers to wildfires, but Dionne said the flames were worrisomely approaching.

“We are fighting it on the ground and in the air,” he said.

According to the Saskatchewan Department of Public Security, the fire began on Monday afternoon, about four kilometers northeast of Prince Albert. The cause is still under investigation.

It grew rapidly due to unseasonable high temperatures and strong winds.

Later that day, a state of emergency was issued by Prince Albert and the Buckland Municipality.

At the beginning of Tuesday, the fire spread to about 37 square kilometers, but it appeared to be moving away from the northern end of the city.

Dionne said the flames jumped over Highway 55 as well.

According to the Safety Department, 29 people forced to evacuate from the surrounding area checked in at a local hotel. About 40 other people in the nearby house were waiting to leave in the event of a fire.

Dionne said no homes or other structures had ever been destroyed.

Steve Roberts, along with safety agencies, said the flames remained uncontained. “Our weather wouldn’t be good,” he said.

The daytime highs on Tuesday were close to 30 degrees Celsius.

The expected drop in temperature later this week will make a big difference, Roberts said, but he added that it will take a few days before the fire can be controlled.

The fire caused a serious power outage in many communities far north of Prince Albert.

Joel Cherry of Sask Power said that 10 transition structures were damaged and many were burned down.

Cherry said there are additional challenges in regaining power. A single power line served the entire area, requiring the crew to reach the area by helicopter.

“Logistically, it takes time to deal with this kind of thing.”